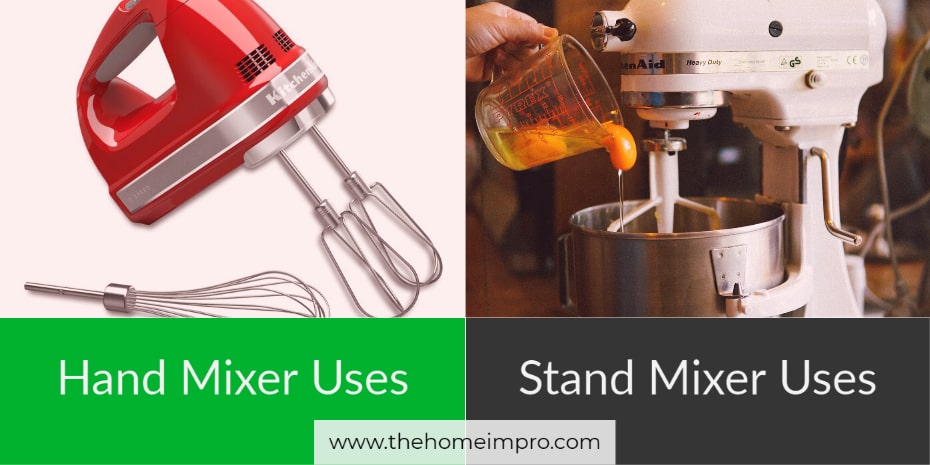 There are certain jobs that you can order your hand mixer to do them for you in no while. While the traditional mixing techniques demand hours to prepare the composite, the mixer requires just a few minutes to present the whole preparation in front of you. For getting that, you don’t even have to sweat out anymore.

So, with consuming little time and employing no labor, you can see your recipe waiting for being cooked, fried, ingested, etc. This is the main benefit of having a mixer in your kitchen.

The more the demand for varieties of flour-based recipes is expanding rapidly, the more the people are inclining towards purchasing the mixer.

Now, in the US, we can hardly find any family having no mixer because not only for various recipes but also for the time-saving power of the mixer.

Besides, many people have no way to do any mixture without the mixer. They cannot use their wrist or fingers so efficiently as the mixture requires. They are strictly forbidden by the physician to do any laborious work. They cannot help relying on the mixer.

Now, more talk, less action-type situation is likely to be emerging here. Let’s follow the main direction. Which is that? This is a little bit about the usages of the hand mixer first and then of the stand mixer. Let’s have a look:

One of the difficult tasks is dough-mixing, especially brioche, focaccia, pasta, and sourdough with the hand. We can somehow manage to prepare dough by using hands but the real frustration comes when our final product reacts in a different way. Disabled recipe, right?

The mistake lies in underdeveloped gluten. To do away with that problem, you would get better support from your mixer. The mixer, with the help of beater, supplies air across the dough. That’s why your preparation will give you a warm smile.

Actually, many people buy the mixer mostly for preparing dough and its various types. As we mentioned, mixing dough is one of the hardest tasks in the kitchen.

Probably 60–80% of people pick up this stuff to prepare all types of cake recipes. Accordingly, the hand mixer never disappoints its master and tries its best to give the master a better service. Once you put the ingredients perfectly in the mixing bowl, the mixer will provide you with an awesome mixture for the final outcome.

Though the cake mixture is not so difficult as dough, people prefer the mixer for this recipe for the best outcome.

Cream gives our final product a stunning look. Most of us sometimes fall in love with the panorama of the cake land rather than going through it. All mechanism becomes possible here only with the help of creamy decoration. So, what are you looking for? Start using your mixer in cream-making job for various usages, for your cake and dessert.

Shredded chicken! That’s an amazing formula to add some incense to the nose of the diners. But how to shred the chicken with the mixer? Is it putting some of the raw chunks of the chicken in the mixer, and waiting for the chicken to be shredded in the mixer? No way, guy!

Mashing potatoes is a difficult task and it requires a lot of patience to get the work done. After peeling and boiling the potatoes, drain the remaining water. Place the boiled potatoes into the mixing bowl. Whip them thoroughly. Be sure whether or not your beaters/whisks are strong enough to take the risk.

The hand mixer users have to be strong enough to handle the mixing bowl under the mixer; side by side, they have to operate the machine.

If you don’t want to make your hands sticky and stinky, never fear at all when you have the right device to use. How many eggs would you like to whip? Whip them with the mixer.

But one thing to keep in mind never put the sort of hard ingredients in the mixer that makes your mixer’s gear stop working. Give your hand mixer some rest after a while during the whole procedure.

All of the usages that we have mentioned in the hand mixer segment can exactly be applicable to the stand mixer.

But as stand mixer has a faster/stronger motor, it can do far better than the hand mixer.

Its attachments like helix beater, flat beater, wire whisk, dough hook can be used for a particular task. You can use them by simply following the user manual.

The stand mixer takes less time than the hand mixer because of its high capacity.

As we explained earlier, people who have health issues like wrist pain, muscle pain, low grip ability must use the stand mixer instead of the hand mixer.

Stand mixer doesn’t require you to take any kind of headache throughout the preparation. You just have to set it up for the purpose, and it will manage it.

Once you are satisfied with the usages of both types of mixers, it is your turn to choose one of them.

First, think whether you can carry a hand mixer and your bowl during the task with a strong grip because many people complain about this issue. But if you choose to stand mixer, though it costs more, you won’t have to take any stress.

The Ultimate Guide to Taking Good Care of Your Oven

How To Remove A Ceiling Fan?