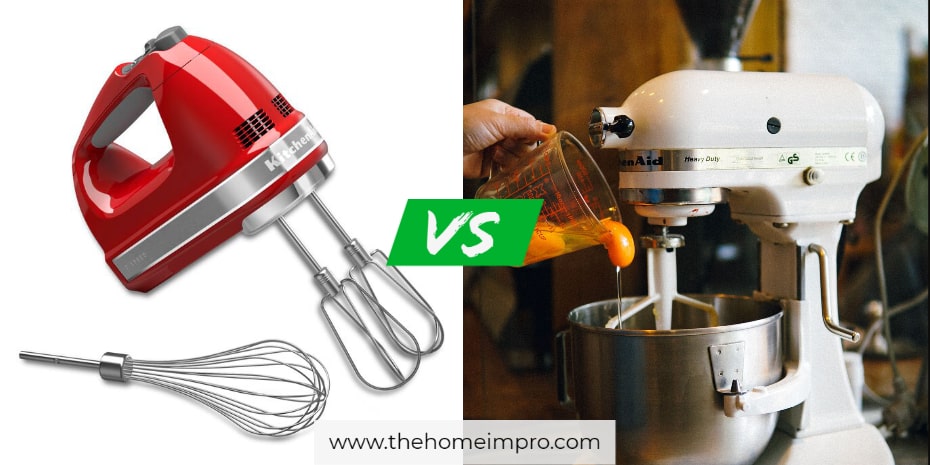 A mixer or kitchen mixer is a kitchen appliance that helps to mix different food ingredients as a cooking preparation. It uses a gear-driven mechanism to help automate the repetitive tasks of stirring, whisking, or beating. It is one of the most useful kitchen appliances you will ever have.

When you use your hand along with the mixer—without bathing your hand with flour or other ingredients but moving a little—to mix the ingredients, then this mixer will be called a ‘hand mixer’. It is called so because you are still using your hand at the time of its performance.

On the other hand, instead of using your hand, when the whole mixing process is done by the machine itself, this is a ‘stand mixer’. The reason is it is a standing stuff, having a bowl for mixing the recipe.

That’s why you have to do nothing without switching it on and off. So, you can better go to the balcony for refreshment leaving it for a while to preparing the preparation for you before you are back again.

Difference between a Hand Mixer and a Stand Mixer

From the definition as well as their names, we can figure out some distinctive characteristics of each type. So, let’s see what these are:

Trade-offs Between a Hand Mixer and a Stand Mixer

1. A hand mixer is something that only relieves you from palm and wrist exercises. But stand mixer, as an advanced machine, will relieve you from holding it throughout the task.

2. If you are suffering from wrist pain or joint pain, a hand mixer will be a litter bit tougher for you to handle because you have to hold it up and control the bowl as well as move the beaters along during the procedure.

So, you would better search for a stand mixer because there is nothing for you to operate during the process. As it is automated, you don’t need to take any hassle like the hand mixer. So, let it do something for you.

3. If you have the capability of handling a hand mixer, you can purchase a hand mixer because it occupies less space than the stand mixer and consumes a little energy.

4. Be careful with your bowl that you are handling under the beaters of the hand mixer because if the machine finds any sweep, then it will immediately split the ingredients off from the bowl.

If you are wondering about a no-tension zone, we will ask you to purchase a stand mixer. Here, you will find no wobbling or tipping.

5. If you are tilting a little towards the stand mixer, remember, as long as you beat it for the batter, your energy bill will hold its bridle firmly. So, be careful about it.

To sum up, a hand mixer is cheaper, less energy consumer, little stuff; at the same time, it is not for the people who are suffering from joint pain.

On the other hand, stand mixer—though occupies bigger space, costlier than the hand mixer—is very helpful for those people. Now, it is your choice which one you are going to purchase; both are useful kitchen appliances.